FREE SHIPPING IS BACK! 🚚 Free Shipping On All Orders Over $99 • STOCK UP & SAVE!

What Does the Percentage of Nicotine Mean in my E-Liquid?

One of the common question we aim to clear up is what the numbers on the labels of e-liquid (with nicotine) mean. When you see 6mg(0.6%), 12mg(1.2%), 18mg(1.8%) or 24mg(2.4%) those numbers represents the concentration, or strength, of nicotine in your e-liquid. It is measured in milligrams of nicotine per milliliter of e liquid (mg/ml) and often shortened to mg in you e-juice bottle. 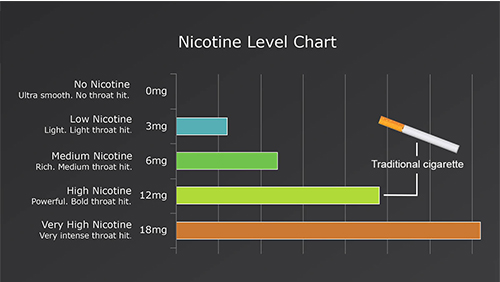 Now, your next question may be what would be the right nicotine strength for me? Well first off, if you are not a current smoker, we advise no nicotine, as it’s a highly addictive substance. Now if you are a current tobacco smoker, and already hooked on nicotine with a desire to make the switch to the cleaner alternative, then find below our recommendations based on our transition and conversations with vapers:

Please note the type of device also helps determine the strength of nicotine that would best suit your needs. For example for vapers who enjoy a direct lung draw/sub-ohm (similar to shisha) you would probably want lower levels of nicotine. This is because in order to obtain a direct lung pull your device would have a higher setting producing more vapor compared to a  mouth to lung draw (similar to how a cigarette would pull) which would require higher nicotine as less power is required producing less vapor. Ask your local vapor shop on the differences between a mouth to lung draw versus a direct lung draw to determine what's best for you.

Please be advised for symptoms of nicotine overdoes. To avoid nicotine overdose, pick a sensible level of nicotine! As mentioned, start off low and test if your body needs a higher mg. Ensure you keep your puffs to the minimal and be aware if you start having headaches, nausea or dizziness, as they are common symptoms of nicotine overdose. If you experience any of such symptoms, discontinue use of all nicotine products and speak to your family physician immediately.  Remember don’ take too many puffs in one session, especially with nicotine, as you may get light headed. It’s recommended to vape at lower voltage than 5 volts (preferably under 4.5volts), adjust voltage/wattage based on e juice flavour and regularly change your coils to keep your tank clean.